The mud is not inanimate as she had thought it to be; out of the corner of her eyes, she sees it move in a sleek file. Pushing back the mass of curls out of the way with her chubby fingers, she squats down in the corner of the sandbox. On closer look, she finds that this moving piece of mud is different from the rest. For one thing, it is green. She puts out her hand to feel the cylindrical body wriggle, protesting against her hold. She puts it back on the concrete path beside the sandbox and observes.

The worm makes its way quickly towards the opposite side of the narrow path, towards the swings and slides where the older kids play. The playground is usually filled with boisterous children of all ages. But not today; today, it is just her. The knowledge emboldens her, and she crosses the path to follow the worm.

There is a little growth of grass here, with weeds scattered here and there. The worm quickly scuttles over behind one of the weedy leaves. The leaves interest her more; they are different than the grass around, and different than the full-shaped ones in her book. They are carved and designed like the stencils that she has for her colouring books. Bending over the tiny plant, she carefully plucks out a leaf. The mud around immediately becomes a sea of motion; ants and worms all in chaos. She takes a few sharp steps back; they are all like Chico dog, unhappy to be disturbed from their slumber.

The swings are too high for her to get on by herself; she had fallen trying yesterday. Can she try again today? In his usual bouncing excitement, Chico dog had jumped on the swings last week, only to land flying on the ground; shocked that the seats moved. She had been amused by his horrified look.

She stands in front of one of swings, set slightly lower than the rest. The seat is in line with her chest. A rush of struggling limbs; arms tightened on the metal ropes, legs flailing about in the air, and she is flat on the ground. She settles down on the lower seat of the see-saw to rest.

The insect hole, hidden behind the shade of the small plant, has gone back to its peaceful existence. She sees lines of ants following each other in and out of the hole. The worm that she had followed has climbed over on one of the intricately patterned leaves. It is soon joined by a friend, and together, they cut out a pattern across the midrib, somewhat like the lace on the socks that she is wearing.

She is distracted by the sound of laughter coming from the street, and looks up to see two boys enter the playground. They are slightly older than her; she has seen them sit on the swings by themselves. They make their way to the see-saw.

She obliges, and toddles back to her sandbox, vaguely aware of the chatter behind her. One of the worms has escaped from its leaf house again, and joins her in the sandbox. Her shoes have left a pattern in the mud, and the worm follows the crevices. This fascinates her. She creates a gateway out of her shoe’s print, and begins tracing a path with her finger for the worm. The worm is slow, and by the time it reaches the gateway, she has already created an elaborate labyrinth over half the sandbox. Settling down cross-legged in the middle of the sandbox, she watches the progress of the worm, engrossed.

A heap of mud lands directly over the worm, burying it. The two boys are standing over her, their hands muddy.

She looks back to ground. The worm has managed to find its way out of the mud, and is gliding down the tiny mound.

Before she can point this out to the boys, she is showered in fistfuls of mud. The mud pies are strong, hard enough to hurt her. She covers her face, but her hands are already dirty. Tears spring from her eyes, streaking across her muddy face. She does not understand.

“What the mother must be thinking, leaving her girl playing about in the mud like that!”

She opens her eyes to find the women, the boys’ mothers scrutinizing her, distaste plain on their faces. She looks towards the gate for comfort, her red house visible on the other side of the pavement. Chico dog had been roaming in their garden, but now has come to the playground to investigate. He gives her a lick. The women look on in disgust. One of the boys takes a fancy to Chico and makes to pet him, but is pulled back by his mother.

She wants to tell the boys that Chico will not bite, wants them to know that the worm climbed out of the heap of mud. Chico tugs at her pinafore.

She is in the tub, telling her mother all about the worm, how she fell down the swing, how the boys were scared of Chico. Her mother smiles, asks her questions about the stencil leaves, and gently washes the mud out of her hair. Inwardly, she thinks of the articles she read that morning, about prestigious science awards going only to men, of glass ceilings that would not break. She thinks of her own hard-earned tenure, her patronizing colleagues, her difficult journey. She tries to quieten the guilt that is seeping through her; guilt of being a few minutes late, caught up in a work call. She looks at her bright, inquisitive daughter, and wonders if mud is enough to sow seeds of doubt and hesitation.

As the mother tucks her into bed, her daughter tells her that she will go and see the worms tomorrow. She hopes that they will have new patterns on their leaves. A relieved sigh escapes the mother. Today, at least, was not the day.

I recently came across the term “Kintsukuroi” while browsing the vast labyrinths of the internet. It is a Japanese art form, which literally translates as “to repair with gold”.  The philosophy behind it is quite beautiful.

When a ceramic pot or bowl would break, the artisan would put the pieces together again using gold or silver lacquer to create something stronger, more beautiful, then it was before. The breaking is not something to hide. It does not mean that the work of art is ruined or without value because it is different than what was planned. Kintsukuroi is a way of living that embraces every flaw and imperfection.  Every crack is part of the history of the object and it becomes more beautiful, precisely because it had been broken.

Firstly, notice the first word of the quote. It does not say “If”, it says “When”. We talk of chance and of curve balls to indicate that this is not what we expected, and now it hurts. Of course it does. But a lot of us are unable to let go of the bitterness that comes with the pain. “Why me?”, we ask. There is no simple answer for that. But what we do need to accept is the certainty of pain. Being broken is an eventuality, not an accident. And I do not mean this in a cynical way. I mean that brokenness leads to the wholeness that we have, at some point.

I do not read too much into the “stronger and more beautiful” aspect of it. It would sound like empty words to someone who is or has been broken. What I do like to take from this is the attempt, to heal oneself, with gold. I like to think of it as taking responsibility for our brokenness, and pouring in love and empathy and kindness to repair ourselves. If at all we need to ask “Why me?”, we should let that become a tool to better our reparation, and not as a means of wallowing in self-pity. I know I certainly need to learn that lesson. 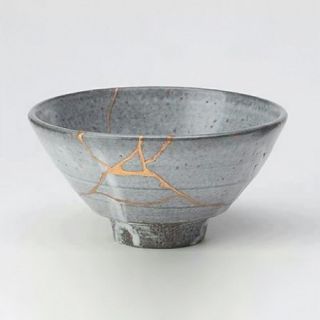