So, one beautiful morning when I had nothing to do (I lie. I had tons of work and was too bored to do it), I Googled the following query: writers are

Here’s what was listed in suggestions:

One positive thing: writers are engineers of the soul. Just one!

Now, you may have noticed that my blog’s name happens to be The “Writer’s” Nest. So this particular list of suggestions was almost a personal attack. Therefore, I’m going to go about busting (or not) these myths.

The engineers fared slightly better thankfully. Ah, Google! At least we share our love for engineering. 🙂 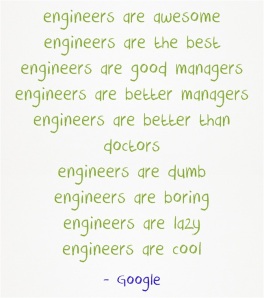 Have you people heard of silly myths about things that you love? Careers or interests?

4 thoughts on “Writers are…”